What if the scary book you were reading could really shock you?

This piece of biofeedback-based experimental book art detects the rising fear or excitement in a reader and then amplifies it, by causing tingling in the hands through to mild electric shocks. This effect is created by a wrap-around book cover that can sense the physiological changes that occur when a person sustains fear or other arousal, and then responds by injecting a small electric current through the book jacket and into the hands.

Important note: Those who suffer from heart conditions, who wear a pacemaker, are epileptic, pregnant, or undergoing cancer treatments should not use this device. (It works at low enough levels that it should be safe for those people but I am not familiar enough with all makes of cardiac implants and other therapies to guarantee safety.)

The Spine Tingler in use

In essence, the book jacket acts as a lie detector. (Lie detectors don’t detect lies, but they do effectively measure increased activity of the sympathetic nervous system—the fight or flight response.) When you read something that excites you, your sympathetic nervous system ramps up leading to the galvanic skin response, in which the electrical resistance of the skin changes. The response kicks in with fear, anger, being startled, or sexual feelings.

When the device measures the increase, it switched mode to send an electrical current proportional to the level of sympathetic nervous system response through the book cover. It starts out feeling as a very slight tingling, increasing to enough of a shock that most people would naturally recoil from it, probably dropping the book.

The first stage of the Spine Tingler algorithm is to detect the galvanic skin response. This is achieved through use of a home-made combination resistive and capacitive touch panel. It consists of one sheet of conductive polymer and two sheets of striated conductive polymer—conducting plastic—separated by a very thin sheet of non-conductive plastic. (The capacitive touch panel is similar in principle to the iPhone touch screen but not quite the same.)

END_OF_DOCUMENT_TOKEN_TO_BE_REPLACED 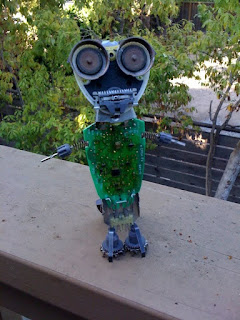 This one is just for fun. I had an electric razor which had died and wasn’t really repairable. After having a hard time breaking inside the thing, I managed to dissect it completely and have reformed the parts into what I am calling my etolemur, because of a very vague resemblance to an otolemur.

I didn’t reuse all the parts but all the parts of this little guy came from the razor. My favorite parts are the eyebrows and the super-sharp claws. He also has some extra talons out the front but those are primarily due to his need to defend himself against creatures made of bigger and better electronic equipment. His ancestors were picked on a lot so evolution has given him a couple of extra advantages for survival.

He’s not great at standing on his hind legs unassisted so he uses his tail for support when showing off like this. His arms are pretty agile and springy, which are of great use both in launching himself from branch to branch and as shock absorption when he takes a rough tumble when playing with his other etolemur pals.

An essay for this entry that starts as follows and continues at Cathemeral Thinking:

As I work toward launching a new magazine, I am contemplating a question that seems to have an obvious answer to many people, but is definitely contentious, and for which there is no real consensus. Although finding a concrete answer might also seem like a philosophical pursuit of no real importance, I think it is pretty important to be aware of what I am about to do. I should probably already know the answer to this as editor-in-chief of one magazine that I built, but the changing publishing landscape prompts me to re-examine it. Knowing what makes a magazine also gives us a chance to emphasize what is characteristic and gives us hints as where we could focus our efforts.

Summary: An exploration of the essence of magazines reveals that their defining characteristics have more to do with how they represent and enable communities rather than any physical or publishing characteristic.

While I work toward establishing a new magazine, I am contemplating an existential question:What is a magazine? It’s a question that seems to have an obvious answer to many people, but is definitely contentious, and there is no real consensus on an answer. Although finding a concrete answer might also seem like a philosophical pursuit of no real importance, I think it is essential to be properly aware of what I am about to do. To be honest, I should probably already know the answer to this as editor-in-chief of another magazine that I started up, but the changing publishing landscape prompts me to re-examine the topic. Knowing what makes a magazine also gives us a chance to emphasize what is characteristic and essential and gives us hints as where we could focus our efforts.

There are really two questions to disentangle in this discussion: “what have magazines traditionally been?” and “what is a magazine in essence?” It is the latter I am most interested in.