I’m writing this at 30,000 feet on the way from San Francisco to London where the World Conference of Science Journalists is taking place, although I’ll only catch the last day of that meeting on the way to other places. Being on the plane reminds me of how much flight plays a role in the lives of scientists. They fly so much because they need the face-to-face contact that builds the relationships and eases the communication that moves science forward. Here are a few stories about scientists I know and their relationships to planes and air travel.

A. I’d like to invent a device that one particular colleague could wear on his lapel, and he always has lapels, that shows the current update of how many miles he has flown this year. It’s not possible to have a conversation with him that doesn’t include some proud declaration of how miles he has accrued. The device would automatically interrogate his frequent flyer account, grab the latest number of miles, and perhaps proclaim in glowing ultra-bright LEDs, “I’m 178,452 miles douchier than last year”. He’s not alone in this behavior and there would probably be a market for this device, even with such a self-immolating message. I wonder if he’s tweeting his mileage status.

B. Another colleague is so concerned about the energy costs of travel for science that he is doing everything he can to reduce his personal energy consumption. He has charts and data, all available online of course, and has taken to not eating meat for periods–because of the energy savings–started cycling, traveling by bus or train to other cities for conferences instead of driving or flying. He was recently faced with the need to fly from the United States to the United Kingdom for a job interview and needed to find some large energy savings to be able to meet his energy consumption goals. At a recent conference he asked if anybody in the audience would be prepared to make behavioral changes to save some energy which they would effectively donate to his cause. I realize as I write this that he was essentially building a personal cap and trade system for energy consumption. I admire his discipline and know I couldn’t replicate it. But can his dedication and approach scale up to larger communities?

C. A prominent physics blogger writes at length about identifying the very best seat on each model of plane that he regularly boards to fly between the United States and Europe. He’ll explain why this seat makes such a difference to his flying experience, and is close to obsessive about getting that particular seat. Of course, he won’t tell you which seat it is and won’t leave quite enough information for you to deduce which it is, in fear of somebody else following his plan and grabbing that seat before him.

D. Another colleague first experienced the online wi-fi network aboard a major carrier. What did he do with it? He called into a weekly videoconference that his colleagues were in. Whereas most scientists see a nine hour flight as a chance to get some work done without interruption, he jumped right back into the collaborative research he’d be doing 30,000 feet lower.

E. That same guy berates his graduate students if they ever need to check luggage. Checking luggage introduces inefficiency into travel that they ought to be smart enough to avoid. The frequent flyer I mentioned above feels a personal disappointment if he gets to the end of a trip and hasn’t worn every item in his bag precisely once. Make sure you don’t stagger near him with an overfull cup of coffee because you could really wreck his day with one small slip.

Each of us has behaviors in flying, although I often see scientists configuring their flight environments to make sure they make their work lives as efficient as possible. That’s fair enough, but now that I’m at the end of this essay, I’m going to pull out a book that has nothing to do with work, try to find a way to put my feet, if not up, somewhere that my legs won’t cramp over the next eight hours, and try to get some sleep, because I don’t seem to take quite as much pride in being jetlagged as so many of my colleagues.

Sitting in another meeting room, the guest speaker decides she wants to show some slides. A flurry of scientists whirl about the room pressing buttons haphazardly to make the screen descend from the ceiling, to ensure the projector is actually plugged in and working… Then comes the tricky part, lowering the light levels so that people can still write notes and see each other, but also see the projections on the screen. The light goes off, people titter at this quite expected eventuality, the lights come back on even brighter than before, and after a few more fumbling button pressings, dimmer slidings, and switch flickings, everybody is set. At least until the speaker needs to write on the whiteboard to draw a supplemental diagram. In the laser lab in the next building over, my colleagues face lighting challenges. Much of the experimenting needs to be done in darkness, but the setting up and adjustment of lenses, beam splitters, laser cavities, vacuum systems, cooling pipes, and the rest requires nice strong light to handle the delicate, fiddly parts. The trouble is that most of the material in the room, including the optical table everything is mounted on, is made of reflective metal. Having good, bright lighting that lets you see everything, and isn’t going to cause strong reflections on most of your surfaces–which make it harder to see fine details—is tricky. You don’t even have the luxury of being able to light from directly above, because of the racks of equipment feeding power cables and electronic signals and sensors down to the optical table. When working in the dark, these physicists have gotten used to looking at certain things from the corners of their eyes, where the cells are more susceptible to dim lights, even though it’s at the expense of color vision. Looking right at something is the best way to make it disappear in a dark room, and even though they’re physicists, that has nothing to do with Schrodinger’s cat—it’s just a function of biology. 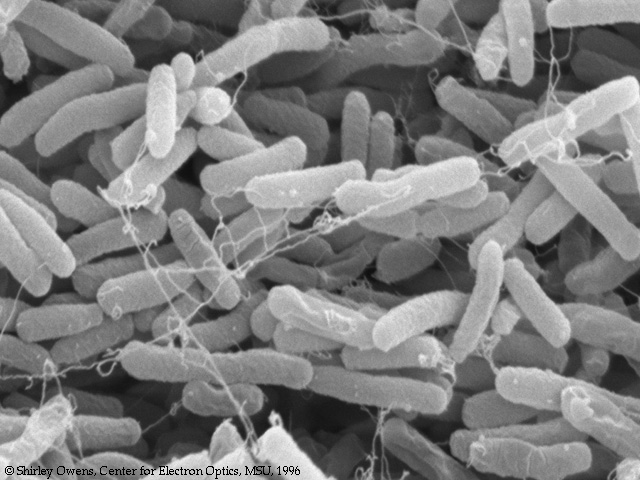 On another part of campus, a friend is studying photoautotrophism. In this instance, her photosynthetic bacteria need both the environment of a sterile lab for replicability and a source of light that mimics sunshine. Fortunately, there is a whole range of lightbulbs that give different variants of daylight spectra suitable for the purpose. There is a market for lightbulb with exotic spectra for uses in science labs, but also in spinoff applications for experimental photography.

This aesthetic manifests itself in everything from architecture and office furniture to design and dress sense. Yes, that’d be the concrete box buildings to socks with sandals. The anti-einsturzende neubaten, if you will, and stuck in the same era.

So how does this aesthetic come about? Based on more conversations than I care to count, it comes down to something pretty simple: Scientists want to project an image that they really are all about the science, and that anything else is a distraction, a diminution of their aims. Scientists have become so acculturated by this idea that they have practically become ascetics, rejecting anything that might signify a motivation other than scientific research. Their environments and accoutrements lean toward bland simplicity, self-abnegating and almost monastic.

“We,” the scientists say in my imagination, “have much more important things on our minds than fashion. And so we will make sure that we can never be accidentally mistaken for subjecting ourselves to the whims of trends, which have no logical or rational reason for coming about.

“We find our beauty in the world of the mind and, to signify that to the each other and be part of the club, deny ourselves the so-called luxuries. We stick to the essentials of function and find ourselves empowered by our asceticism.”

Of course, there is no evidence that this really helps anything.

Everybody within the scientific community over a certain age knows what happened to Carl Sagan, not only for daring to try to communicate beyond his peers, but also for wearing his famous turtlenecks, which were out of place within the scientific aesthetic, but well accepted at that time as a fashion option within broader society.

And yet, Sagan did more for the public appreciation of science, and more for encouraging students to study science than just about any other scientist of the era.

In a strange reversal, it is only a matter of time before the hipsters accidentally adopt the scientific aesthetic, having already passed through the turtleneck phase. Then it would be race between them to reject it all, except that the scientific culture won’t have even noticed the hipsters until they are long gone. And not just that passing fashion, but the whole tribe.

It’s fair to ask why it even matters what fashion choices scientists might make. The issue is that the ascetic aesthetic pervades not just clothing but all kinds of choices about the scientific environment and plays a big part in determining the public image of science. Most surprisingly, it is a decisively anti-creative choice given that science is fundamentally a creative pursuit.

Even the constraints of this aesthetic might not necessarily damage the creative scientific process. But they do damage the image of science among non-scientists. And so we end where we began, looking for an answer to questions about what does science/a scientist/a scientist’s workplace look like. Scientists have a well-developed intracultural aesthetic. It helps them convince each other that they are serious about their work. But it doesn’t do much to convince the rest of the world to play along.

There is a hidden world of science. It’s right there to see but nobody particularly notices it. Non-scientists don’t live in the world of science and so rarely have an opportunity to observe it and scientists are so embedded in their world that they don’t notice this world. This hidden world is the environment of science. It includes the places, objects, behaviors, and cultures of science that exist outside the realm of what would conventionally be called “the science” that scientists perform, but is inextricably linked to the science. There is a complex interplay between “the science” and the “environments of science”.

These are all topics and questions that this blog will try to address. I realize that it’s an area I’ve been skirting around for a long time, and has influenced a large number of stories in my day time job editing symmetry magazine. As an ex-research physicist who came to gain a different view of science as a journalist, the environments of science and how they are shaped by and shape scientific endeavors have become clearer.

The scope will be fairly broad, driven mainly by examples, from which I hope to see various recurrent themes. I’ll be exploring connections between science and physical space, tools, architecture, design, objects, fashion, location, sensory experiences, processes, and cultural constructs. Many of the examples will be from the world of physics, as it is the area I have strongest connections with but I will be looking for guest commentaries from others that concentrate on other scientific fields. For now, I’m not going to try to be comprehensive, but just observe, describe, and conjecture about the environments of science.