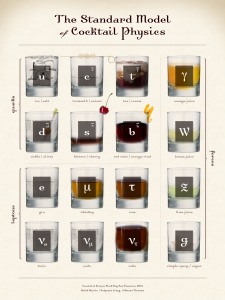 The fundamental laws of the universe create recipes for how particles combine to create other particles. Why not make these recipes a step more literal and make cocktails based on the laws of physics? A kind of “Quantum Mixology”.

We have matched cocktail ingredients to fundamental particles in a way that the properties of the particles match the properties of the ingredients as much as possible. For example, the electron and the electron neutrino are often found together in particle decays so those two particles map on to gin and tonic respectively. In addition the neutrinos are much lighter particles so they correspond to the mixers rather than the alcohols. A wealth of choices like that underlie the mapping from fundamental particles to cocktail ingredients.

The cocktails are presented as a set of recipes, defined by compound particles, but we have also done a back translation and adapted classic cocktails to a quantum theme, identifying these new recipes by their particle ingredients.

This work was completed during the 24 hours of #sciencehackday 2012 in San Francisco by a team consisting of
David Harris, Julyanne Liang, Matt Bellis, Moon Limb, Morris Mwanga, Oksana Timonin, and Yevgeny Binder.

The slides from the presentation of the hack, including recipes, are at http://www.slideshare.net/physicsdavid/quantum-mixology

The Higgs recipe isn’t on the slides but we determine it via a prominent decay of the Higgs via two Z bosons, which can then decay into muons and electrons. That translates to whiskey plus gin with a hint of lime juice (for the remnants of the Zs!)

For physicists: You can generate a cocktail from any Feynman diagram so try your hand at seeing what a beta decay is, for example.